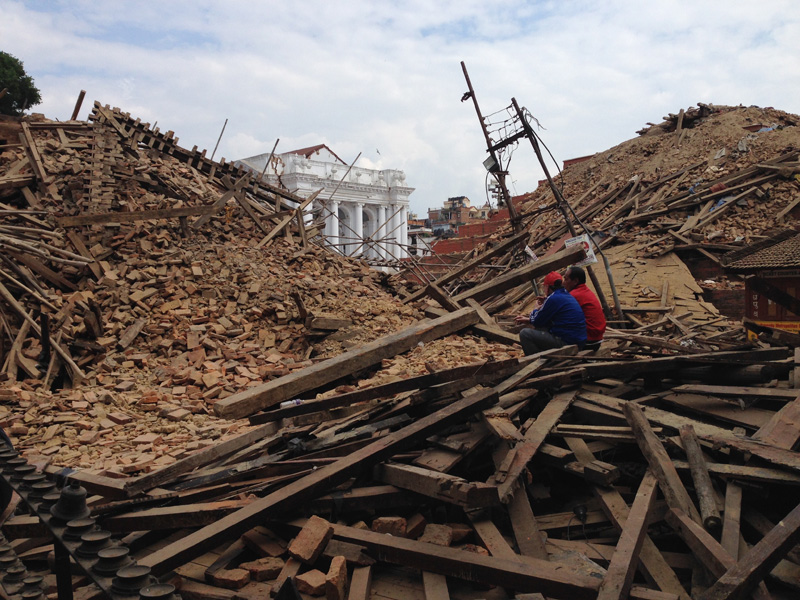 The earthquake which the seismic centre was around Kathmandu happened on 25th April 2015.

Fortunately I was waiting for the bus to Kathmandu in Ilam, the Far Eastern Nepal at that time. So I didn’t have so much problems.

When I was waiting for the bus with other volunteers, we got a shake suddenly.

The movement of the earthquake was… like a Osaka at the Great East Japan Earthquake… no, it was a little more. Around magnitude of 3? I guess that it lasted less than 1 minute, however, the people panicked. Everybody went out and some of them were surprised and excited or worried about it.
I might be the calmest person in the people. Maybe it was because I got used to the earthquake in Japan. And everybody panicked, so that I could keep to be calm by seeing them.
…No. I wasn’t calm a little because I couldn’t understand why the people panicked so much.
The reason I was like a that might be that I’ve never had big problems from the earthquake yet.

I went to the toilet after the shake. Then we got a second shake. I panicked because I was in a toilet and busy at that time. Moreover it was ”No.2”.
Then I noticed that I was in Nepal. I shouldn’t think that the durability of the buildings in Nepal wasn’t same to Japanese ones.
If I was buried alive in this situation…, it would be funny too much!

However, fortunately, it wasn’t happened, and the second shake also was calm down soon like the first one. Then I could give out from the toilet without any problem.

A few hours later, we took the bus to Kathmandu. And we reached Kathmandu next morning with stop-and-go many times.

I thought that the stop-and-go was also because of the earthquake.