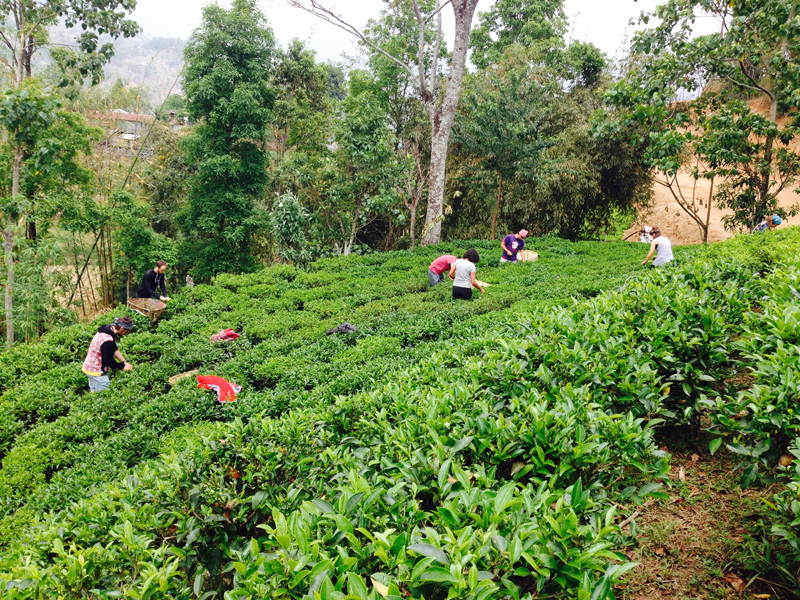 I was picking tea for 2weeks in the beginning of April 2015 in Ilum in the Far Eastern Nepal.

I’ve often had Darjeeling tea and Assam tea from their neighbouring country India. However, I didn’t imagine “Nepal” as tea place. I searched online and figured out that Ilum was famous for its tea. Some people ship the tea made in Ilum as Darjeeling tea because of the big name.

The work wasn’t harder than last time as volunteer in Thailand. Actually, I felt a not doing enough.

However, I ate 120-130 percent in the capacity of my stomach at each meal. Furthermore I ate a lot of pop-rice and I started to worry about becoming fat. So every morning I did exercises with my roommate from the second week onward.

And I updated my blog as if I had had the chance to do it in only this time. As you know, I also translate my blog into English. So the frequency in the updating has been slow. (Of course, my laziness is more serious reason as this situation.) However, I had enough time to do it. When I updated my post I ask some volunteers to correct my mistakes, what was nice. I decided to keep it as a habit.

Thank you so much, my teachers!

Incidentally, the posts I asked the teachers to look over were a bit “blue”. Maybe because of that, the posts seemed to be popular with the other volunteers. Sometimes they asked me when I will write about my Nepal episodes.

Finally! Sorry! However, this post doesn’t have blue jokes! If I need to say, well… nothing.

Anyway, English. My English was a problem. I could understand their conversations in fragments. I always cared about their consideration because Everybody were so nice.

I also cared about the ages because other volunteers were around 5 years younger than me. Then I noticed that people who use “workaway”, “HelpX”, “WWOOF” or etc were young in almost any case. Maybe some hosts have age limit for volunteers. Old guy? Am I an old guy!? Fortunately, the mongoloid people look younger than their real age for other people. So my age isn’t noticed, though!

I have a lot more memories, but I will list them here and leave things open for your imagination.

The stay in this place was finished like that. The host gave me white scarf(?) when I left there. (It was like the stuff Dalai Lama gave Heinrich Harrer in the movie, Seven Years in Tibet)

Then I headed to the city after long time, Kathmandu.