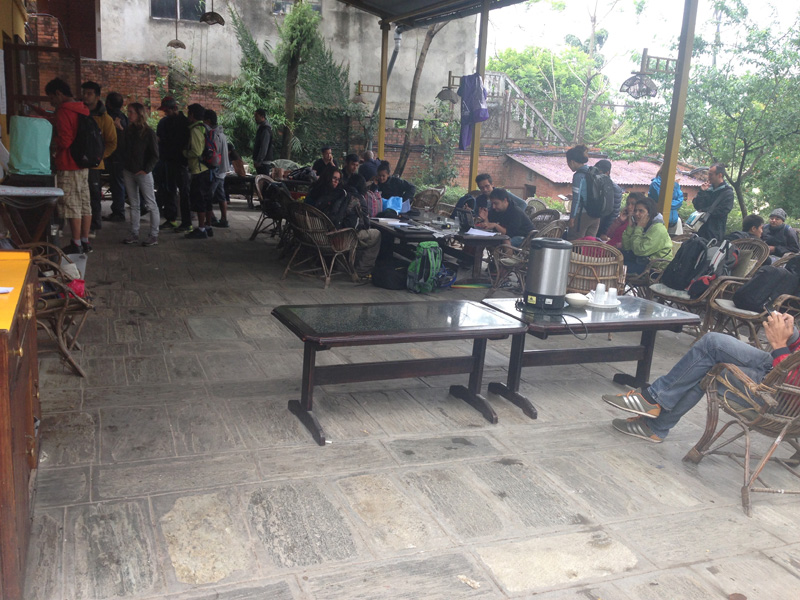 I looked for a place to stay after arriving in Kathmandu, but almost all of them were closed. Many supermarkets and restaurants were also closed.

I stayed in a guesthouse for 2 days, however, there wasn’t any electricity and I didn’t have any water. Then I gave up staying there and went to the Japanese embassy on the 3rd day.

I heard that many Japanese had already taken refuge and had been sleeping there since the day I arrived, however, I moved there on the 3rd day.

I didn’t know how the earthquake was being reported in Japan because I hadn’t been able to use the internet. However, I had guessed that they knew about it from the “international” page in the newspapers… But in the Japanese embassy I got to know that actually the newspapers had the news on the first page as a very serious disaster.
Because I didn’t know that, I called my parents telling them my situation calmly with the phone in the embassy.
… Of course, they worried about me very much. I’m so sorry.

After that, I could finally get public free wifi. Then I checked the emails and some SNS. Then I found some messages from my parents and friends who were worrying about me.
I’m so sorry…

I was disappointed about my carelessness in managing serious situations.
I didn’t know why I hadn’t thought to go to the embassy to understand the current situation… Even though there were some indications that should have made me think about it.
I learned.

In the embassy, I stayed for a while.

They did’t have any showers, but I could use the toilet. (with washlet!!! Japanese high technology!!!) We could wash our hair with the hose outside and the Japanese people who lived in Kathmandu came there to cook our meals.
I wasn’t so inconvenienced. In fact for the first time in ages, I could have Japanese foods everyday.
I thanked them so much.

While I stayed in the embassy, I had the chance to join the volunteer activities and visit an area which had a lot of damage. Then I knew the real situation of the effects of earthquakes, so I was disappointed again that I hadn’t thought that seriously before.
And I was disappointed in myself because I still hadn’t really understood deep inside how bad things were. Always it was other people’s affairs, not my problem.

By the way, I again realised the importance of English at this time. People of many nationalities were working as volunteers for the victims of this earthquake. The organisers were also from various countries. So English was necessary for this activity.

When I watched the video reports about the progress of the activities, I couldn’t see any Japanese volunteers. The east asians I saw were a few Koreans.
Of course, the traveling style and national character is different in each country. However, I couldn’t help feeling this may have been due to lack of English on the part of potential Japanese volunteers.