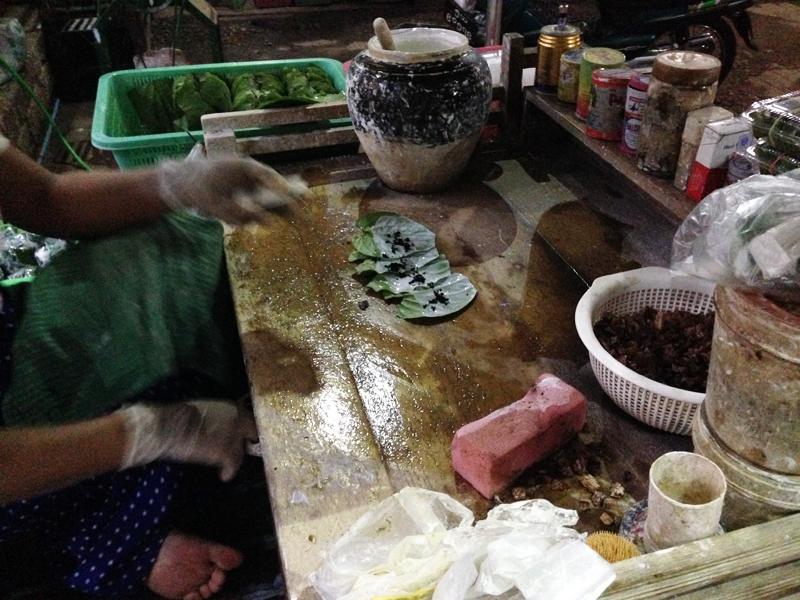 The last dinner in Mint House was Thaisuki.
It was very tasty. Byebye, Thailand.

I stayed one night in the border city with Myanmar, MetSort?????. And I went to the border with a shared taxi, then we went across the border by walk.
The border in Myanmar, Myawadi??? .
My first suprise was how many black people they were. Maybe they were immigrants from India. The second one was chewing cigarettes. I think it wasalso from India. It was difficult to stand it personally. (smell and looking when people spit out it)

I was looking for the bus station which had the bus to Yangon and I got culture shock.

But I couldn’t find the station easily.Then old guys I didn’t know told me “Here is the bus station.”. It looked just a shopfront clearly. I asked him where the bigger bus station was. But They couldn’t understand my English. They told me the price was 15,000 MMK (Around 1,500 JPY).
I didn’t know the standard price and I thought the bus picked me up there. So I was waiting for the bus there. A few minutes later, the big bus written “Yangon” passed there without picking up me.

When I saw that, peoplewere laughing a little. Then the minivan came here. Is this the one!!?
I asked the neighbors about the big bus secretly. It seemed to be 10,000 MMK and no more bus for Yangon today. Moreover the bus for Yangon leaves once every 2 days.
I have to take the minivan. And the driver of the minivan made me wait while gathering for more passengers and loaded for one hour.

The estimated time of arrival was 9-10pm If I could get the bus, it would be faster…

I got anxiety as the time went by. I always checked my current location, so I wondered if we could reach Yangon at least over 11pm.

Other passangers had gotten off the minivan one by one, finally the only passenger was me. And our minivan arrived in a house. This house seemed to be the driver’s home, and he returned home, then a woman became my driver. She drove for a while and dropped me off in a place with a big road.

Not yet! We have a little more distance to get to Yangon!

The female driver told me that I had to catch a highway bus to get to Yangon.
She looked like she wanted to go back home.

I tried to stay calm and tell her my opinion.

“You broke your promise, so take me to Yangon or pay a difference from here to Yangon for me.”
But she couldn’t understand English well.
She looked to want to go back home as ever.

I was thinking what should I do, then the taxi driver who was near us translated her speaking. Because he could speak English.

“Here is also Yangon. You can go to the downtown by catching a highway bus.”
And he told me his opinion…
“Here is the border with another city, and it is dangerous to stay here for foreigners during the night. So he recmended me to g to the downtown of Yangon by taxi.”
I couldn’t catch a highway bus because there was just a shoulder of a road and the buses were running so fast.

I noticed in that moment.

On the way, I told the last driver that I wanted to go to Chaitiyo???? while we were talking. Then he told me that Chaitiyo was easier to access from the place near his house than the downtown of Yangon.

His extra kindness mad this whole situation. but I didn’t need all of this kindness. Moreover he had gone back home! And it has already a new day.

The fare seemed to be around 15,000 MMK. It was the same price as the one from Myawadi to here. I was thinking that no one could help me because now itwas midnight and the only passenger was me.

But… but I couldn’t calm down.

I didn’t have any more ideas, so I took a taxi.

After that, I reached the downtown. But they had only hotels. No guesthouses or hostels. The minimum price to stay was at least 35 USD.
Crazy. It was supposed to be the downtown, wasn’t it? They should have some guesthouses? But there weren’t any.
Finally I checked in a hotel but I had to make the reception staff wake up. I felt so sorry.

My first night in Myanmar passed like that. (By the time I had checked in it was already over 2am)