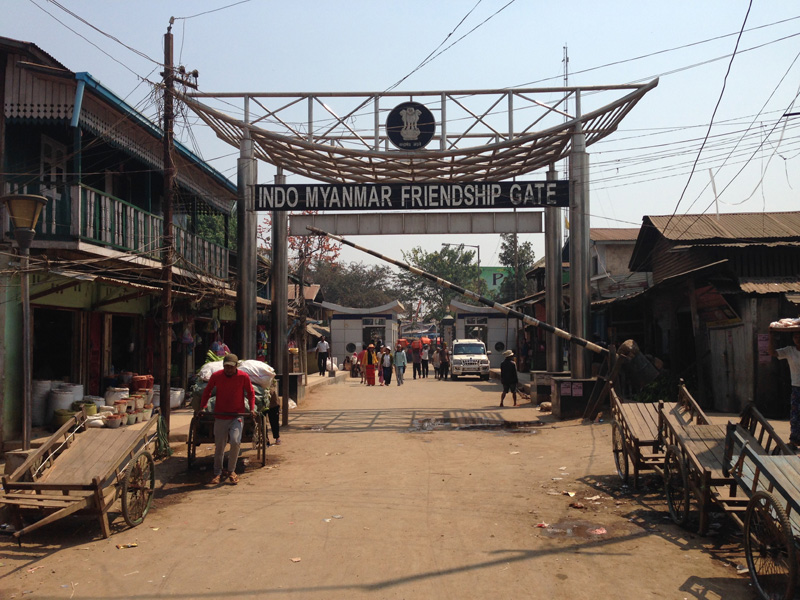 I reached the border city, Tamu. Then I went to the immigration office. The staff offered me to show the permission, but I didn’t have the document of permission.
I asked him to call the staff of the office I applied the permission. Then it was settled. Okay.

Finally I’ve reached India. I made mistake to go back Myanmar once, but I could be in India in result. Then I headed to Imphal. (Actually I forgot to come the immigration office of Indian side, so my passport without a entry stamp of India made a problem later.)

The people and landscape on the way remind me the mountain tribes in Thailand or Myanmar. Many faces of the people in the state of Manipur were similar to ones of Asian people. And there were many christians.

I could become friends with Kochan who took a same car to Imphal. He bought me fruits as I said that I wanted it because of feeling bad.

He took off on the way to Imphal, and invited me his house. But I wanted to use internet, so I turned it down. He seemed to be in Imphal a few days later, so he told me his number to see again.
But I stayed in the hotel (800rupees per night) as a result of looking for hotel. The hotel didn’t have wifi and their bed making was very rough. Regretting.
(I think wifi has not spread so much in North East India as I was traveling there.)

Moreover a strike, Van? happened this day, so almost shop was closed before 5pm. All internet cafes also were closed. I didn’t know about North East India, so I wanted to search about it by internet. But I couldn’t.

My first day in India finished with anxieties so much.