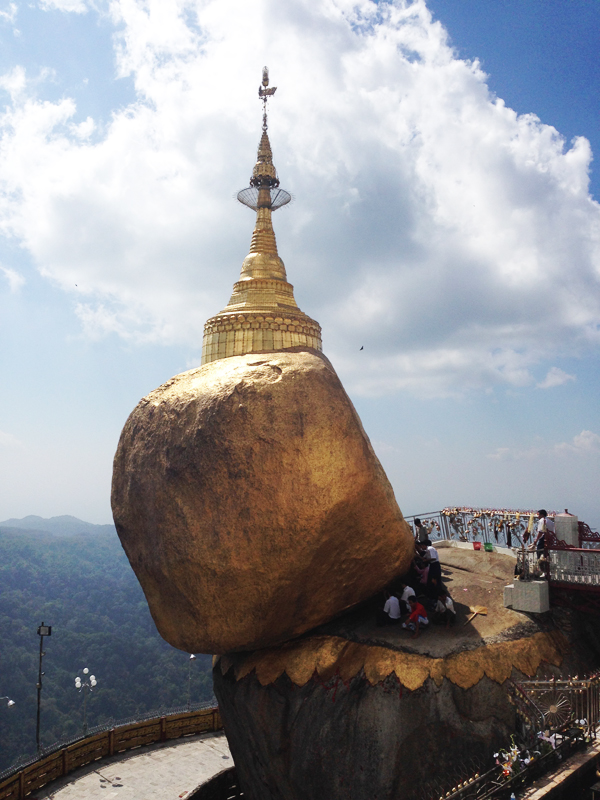 I went to Chaitiyo??? to see the golden rock in the morning. It looked like it was about to fall down, but it didn’t.

The bus for Chaitiyo was playing the fad music of Myanmar maybe. My suprise was that some songs were cover songs of japanese artists. Maybe the japanese artists was Ayaka?

I don’t listen to Ayaka’s songs, but I was glad to listen to them.

I had arrived in Kinpun, then checked in the hotel. After that, I took the bus for golden rock. I noticed that I didn’t have enough cash in the bus to go back to the hotel.

I thought I was able to manage somehow or another, so I reached the pagoda which had the golden rock on the mountain.

On the way to golden rock, we needed to take off our shoes, but the floor was too hot. The sun had made it too hot. It was too hot, so I remembered about Rin in “Hokuto no Ken”*.

*one of the japanese cartoon

I got to lose interest in the golden rock, so I headed to the bus station for descending return path which was different with coming path. I noticed I had made a mistake about the way after a little while.

But I’ve already walked a little while. I knew there were some bus stops on the way for the pagoda. So I continued to walk thinking I could reach there.

I was too sweaty. Then I got chill.

On the way, two local guys guided me to the bus stop, but we reached a waterfall. It wasn’t a bus stop.

There seemed to be only Myanmar people. The guys who guided me asked me, “Go to the waterfall!”. I wanted to do it. But I worried about taking a bus and feeling cold a little, so I gave up.
I came to my sense after I was looking to the children who played in the waterfall with my envied eyes. Then I went to look for the bus stop myself.

Finally I found it!

I made triumphat pose because I kept to descend hard stairs in the houses of tribe people for around 2 hours.

When I was waiting for the bus, the old guy who was a shop staff asked me with his kindness. ( I was too sweaty at that time )

“Do you need water?”
I really wanted to buy it. I really wanted to do it, but I didn’t have enough cash even for bus fare… I told him that with sorry.
Then he said to me with a smile.
“It’s a present.”
He gave me a water of bottle without fee.
Ohhhhhhhhhh! Heyyyyyyyyy! I love youuuuuuuuu!
The water was very cold and tasty! Cold and tasty!
I wanted to return something somehow or other. So I gave him surplus Thai money, 13 bahts. Then he was glad of it. Maybe it was just polite in public.

I told the bus staff that I didn’t have enough cash for the fare. (I needed more 200 MMK) Then he told me it was okay. Yahoo!

And I took the bus. On the way back, another staff collected the fare. I gave him all the cash I had… Other passengers began to talk about something, then the staff gave me back 800 MMK. Uh? Usually I needed to pay 2,500 MMK, but I paid 2,300 MMK this time. Then he gave me back 800 MMK. Ah… It was their kindness.
I didn’t feel that I was shamefull at all, but I felt just thankful for them.

I ate dinner in the cart near my hotel. I ordered something hot because I felt a little cold. Then the staff provided me a kind of noodle and curry soup. And she gave me a hot tea for free.

I felt it, but I wanted to escape from Myanmar early because of chewing cigarettes and the food.