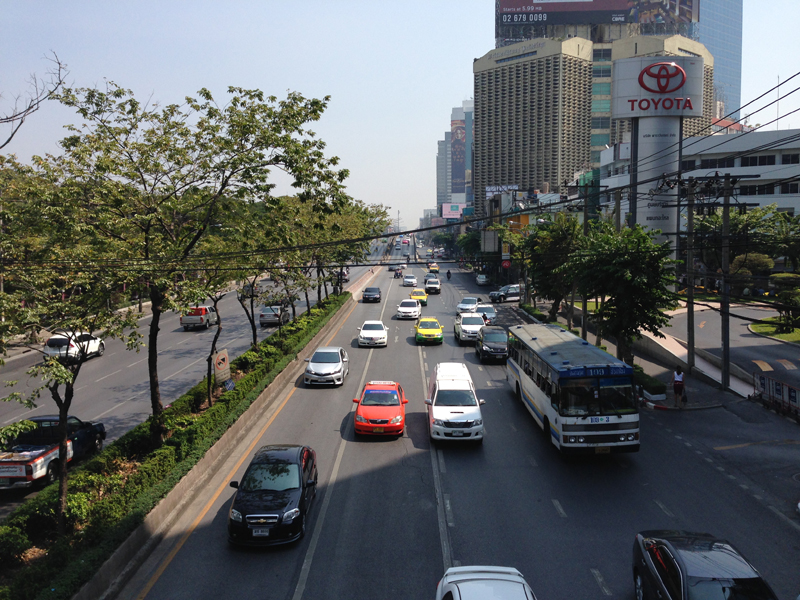 I left Cambodia for Thailand a few days later.

My first surprise in Thailand was how the road clean was. There were no cloud of sand on the road like Cambodia and Vietnam. Many buildings appeared as I got close to Bangkok. Urbanization…

I felt here was more building than my last visit before half a year.
I wondered if it was almost same to Osaka… But when I saw many cart restaurants on the road, I could feel here was Thailand.

First I visited the place of Nicolas who worked in Bangkok for meeting with him again and staying in his place. ( He has invited me before. )

Actually his place was one room in a hotel which had pool, jacuzzi, and gym. So I was so surprised.
The hotel seemed to be located in the area rich tourists and workers from advanced countries and big companies.
Can’t I get inferiority complex in him who was 6 years old younger than me, could speak English very well and had beautiful girlfriend. Yes. I can.
And his friend, Alex who was staying at Nicolas’s place because of holiday was 9 years younger than me, worked in Germany and was a Canadian.
Moreover they were so cool and kindly guys.

Moving by taxi, a little bit of rich thai massage and how much the price for spending for meals… these were so rich for me who traveled by a little budget.